October's butterfly block for the Rainbow Scrap Challenge is done!  The colour this month is pink.  I'm glad this is about scraps, because I didn't have many big bits of pink to work with.

I reached for the 60 degree triangle ruler for this one.  The upper wings are just rows of little 2" tall triangles.  The lower wings are a log cabin style block built around a triangle instead of a square.  Looking at this one I wish I had played more with the lower wings in the rest of my butterflies.  Not enough to want to remake any though!

I skipped the grey and neutral months, but I made two blue blocks so I now have nine butterflies.  I had planned to make extra of some colours to bring the total to 12 but I have decided to just use the nine I have.  I may remake the yellow one in stronger yellows though.  I'll see how I feel once I make the setting locks and see how everything looks then. Here's the flutter:

When I started making these in January I shared two layouts I was considering. Of course the more time passes between the idea and the execution, the less likely I am to use the original idea. When I decided I'd stop at 9 blocks, I tweaked things a bit, adding a few Spring Blooms blocks.  By the time I finished the last block on Monday, I wasn't sure about the blooms idea and I went back into EQ and tweaked things again.  Here's the final layout...unless there is too long a gap between now and when I actually assemble the top, in which case I might change my mind again. 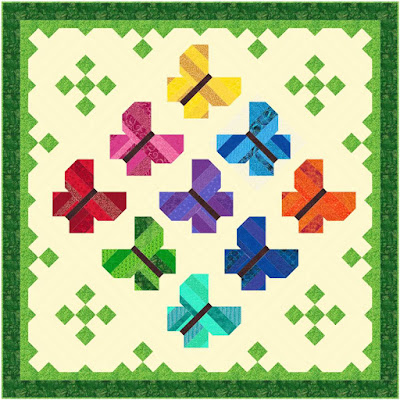 I have enough background fabric but not enough green so this weekend I'm shifting to finishing up a few things. 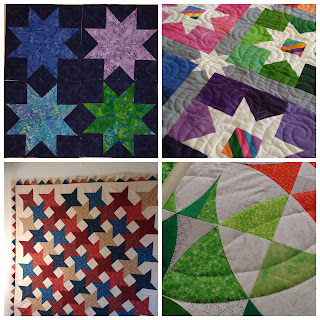 I really want to cut into my Anne of Green Gables fabrics, but I'm saving those as a reward for tackling the short list above.  We'll see how I do!


Linking up with
ScrapHappy Saturday at So Scrappy
at October 21, 2017