You might have noticed I like star blocks. Perhaps it's related to my astronomer husband. In any case, stars have been forming in my sewing room. (Did I mention he studies star-forming regions?)

With a few more years of quilting and designing under my belt, I decided the smaller stars in the sashing needed to shine more.  In the original, honestly, they look more like little X's joining the blocks.  A combination of extending the small star points into the border and making the small stars the same color as the large ones made them pop more. I also decided there was enough to look at here without having a triple border.  Making the borders the same colour as the sashing makes everything else float on the background and gives a more modern feel.

I think this new version has a crisper look than the original.  It's all spiffed up, so it needs a new name. Stellar magnitude refers to the brightness of a star, and I have big (bright) ones and smaller (dimmer) ones on this quilt.  "Magnitudes" seems a fitting name.


Magnitudes is now quilted and has a pretty blue binding but I haven't had time and pretty weather together at the same time to take nice pictures yet.  I wanted this quilt finished sooner than later and had too much on my plate already, so I sent it to Liz Meimann of A Quilted Memory for all-over longarm quilting.  Here's a peek until I can get proper glamour shots. 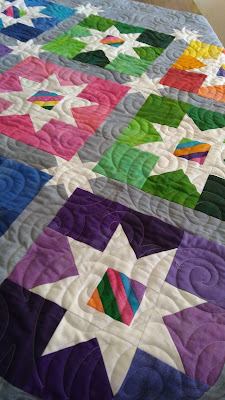 And a peek at the back too.  I found the perfect backing, but it was 60" wide and needed 66".  I really didn't want to buy a whole other length just for that 6", so I pieced a strip from scraps and inserted it into the back to make up the required width. 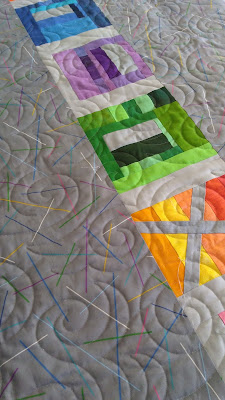 I love the way the back turned out, but honestly, "just slapping fabric together" for those improv blocks took me longer than planned blocks would have!  I really wanted to use up little scraps from the front though, so improv it was.

I will be re-writing the pattern to reflect my design tweaks and to include additional sizes, and re-releasing it as Magnitudes. I just need to write up a different star quilt pattern first so it can go out to testers.  Then, and only then can I play with my Anne of Green Gables fabrics!
at October 30, 2017